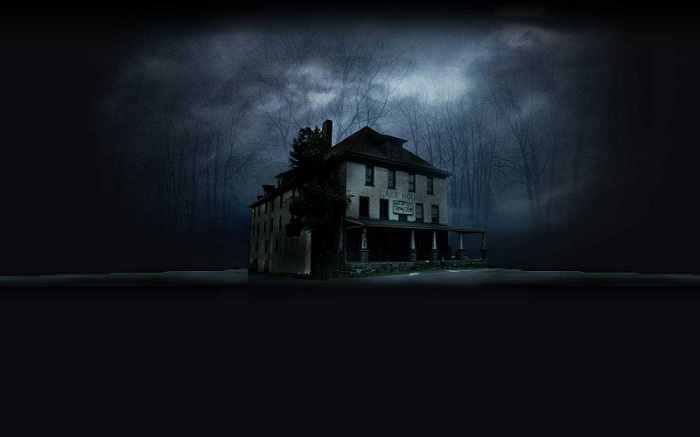 It was a dark night. It was raining. Then our car broke down. We had been searching for a hotel for three hours. It was a comfortable and beautiful place. It was deep night, but many people were there. Despite the fact that it was 3 o'clock in the morning, guests were eating in the restaurant, drinking cocktails in the bar, and speaking in the lobby. It was really strange…    They looked like people from another century. Old, good natured woman met us at the reception. We said that we wanted a double room for one night. The Lobby boy took our baggage and carried on to our room. It was a good, light and comfortable room. We were so tired that… we decided to go to bed. Then we woke up. We understood that we were lying on the floor of some destroyed house. It was creepy … There was nothing - neither the hotel, nor the people. Then a local man told us a story, that hundred years ago there had been a hotel. But the staff were … quite interesting people. They were pale, cold and very polite. If you asked some things they would answer very slowly. Sometime after some guests started to disappear. No bodies or things were found. This horrible things drew the attention of the police. The police studied the personalities of the staff. However, no interesting information was founded. It was as though these people have never existed. And one day all guests and staff disappeared and no one lived in this hotel ever again. Who knows what it was.